One morning someone asked for help on #mongodb…

…with this (reformatted, partial) sample code

Geometry? Within? I’ve never seen this before but it looks like fun!

An appeal to Google turned up mquery which matches the syntax and appears to be an interface to the mongoDB geoWithin query operator.

I still wasn’t sure what the data to be queried should look like, until I found this primer on geospatial data and mongoDB.

I added some locations to documents in the app I’m working on (even though it doesn’t really make sense for a rabbit to have a location… they pretty much stay in the cage where you put them.)

…and tried the OP’s query. That caused a syntax error…

…because I’m not using the Mongoose ORM.

I changed my query to plain mongoDB syntax and asked it to find all the rabbits within the one-unit box starting at [0,0]:

One of the issues with the OP’s query is the coordinates for the polygon. It needs to be a closed shape with the first point being the same as the last. (I wonder what happens if you give it something like a figure eight??)

Another possible issue for the OP was the use of a legacy embedded document format for the location data instead of the newer GeoJSON format shown above. Since this is new development, there’s no reason to use the legacy format.

Later, I created an example app that lets you add and delete items, which have a location, and then query for them. You can find it on GitHub at geojson-example, and here are some screen shots: 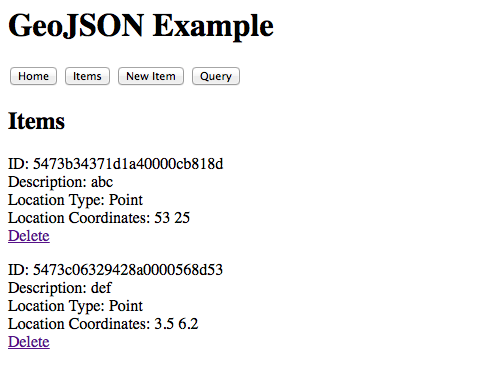 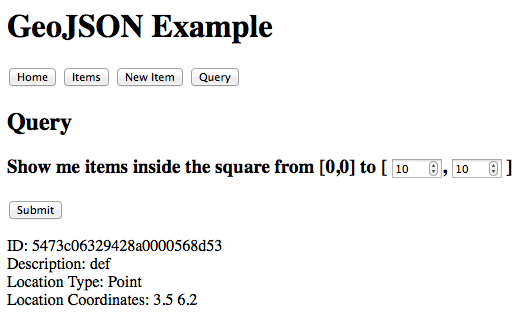